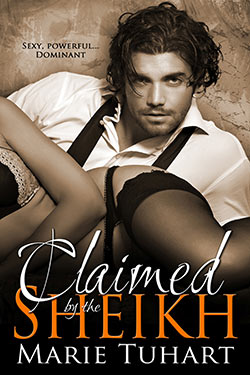 CLAIMED BY THE SHEIKH

Translator Sara Delaney is on her way to Russia when her plane is diverted to London. After a disappointing love affair with a sexy and powerful man she’s looking forward to some downtime. She’s pleasantly surprised when a driver delivers her to a penthouse room in a luxury hotel. Aching with sorrow over the way the man she enjoyed in so many ways disappointed her by not being the take-charge dominant male she needed in the bedroom, she collapses on the sumptuous bed only to wake to find him in her suite.

Sheikh Kasim Harram, leader of a small middle-eastern kingdom, is not used to a woman thwarting his advances. He’d expected the love affair with Sara, the woman of his dreams, to blossom, but she said a final farewell in Hong Kong. He doesn’t know why. After all, he always treated her with the utmost respect, withholding his more wild appetites. When her plane makes an unscheduled layover in London, where he happens to be on business, it seems the fates have conspired to give him another chance at seduction. With nothing more to lose perhaps the time has come to show her his real nature, but will it backfire causing him to lose her forever?

When does a layover in Heathrow airport turn into a weekend of pleasure...and maybe forever? When you're claimed by the sheikh.

Available Here at All Vendors